This posting starts in the middle of a story, so if you missed it, check out Part One before continuing here. Part One starts with me finding myself a guest at a housewarming party in DC where I meet a variety of characters. Thanks for reading! D

I sit down where there’s room and cause some ill feelings from one of the jocks. The girl he has been chatting to now turns to me. She engages me in conversation and I see him rolling his eyes as I reply, “No, I’m just visiting from Canada.” What does he expect me to say? Don’t talk to me, that guy who suddenly hates me was clearly hoping to sleep with you? Of course he thinks we’re on the same team and assumes I’m playing the same game.

In the kitchen I am asked where my favourite place in America is so far. “I love Manhattan, but I wish it weren’t so expensive.” No one here agrees, so much so that I find it amusing. It nearly feels like I’ve violated some cultural expectation. Others express their dislike of the noise, the crowds, the traffic. “What do you like about it?” someone finally asks after everyone has shared why they don’t. “New Yorkers are great!” Well, that opinion drew looks of horror all around. “I have never heard anyone say that New Yorkers are Great,” one of them says, scoffingly. I try to explain the warmness of Manhattanites, how they interact with each other so openly and how in crowds it seems more like fish in a stream than the typical herds of beasts other places. How they have less-defined boundaries of interaction. How they accept the people around them. How they are so adept to live and let live. Part of why I feel completely at home there is that I feel like everyone just accepts each other as they are. They’re used to sharing spaces and they play really well together.

This is falling on deaf ears. All they can think is that their idea of life in the big city as being cold and harsh must be right and clearly I must be mentally imbalanced for thinking anything different.

The artist newly arrived from the Atlanta suburbs oddly suggests that I am best not to visit Atlanta in August, “That’s when all the gays come out.” “Oh, I think we have more gays in Washington,” another guy corrects. “No, Atlanta is a lot bigger than here, I bet they do,” interjects a third. “All I gotta say is that I went out during pride and I will never go out in August again.” the artist continues.

I hold my breath. I hope this doesn’t get ugly because if it does I will need to defend my people. I am disappointed to hear this coming from the gentle artist. I can see Sam across the room and I know that he is not Mr.Out. We met and became friends at an LGBTQ meetup, but in straight company he tends to stay silent. I had asked him about this on the train coming here so as to not cause him any awkward situations. He’s twenty-six and still in that phase when he cares far more about what strangers think than I do at forty. I try to use my common sense, I don’t want to ever put myself in harms way unnecessarily. Additionally, I am finding that often I will enjoy myself and be accepted in friendly terms more when being incognito. Sometimes I regret even sharing that I’m Canadian, as the level of trust sometimes decreases. Oh, I assumed you were one of “us”. The time when “us” refers to “us humans” or even “us life” is coming, sociologists have seen our circles of empathy expand greatly over the years. From immediatel family – to our local community – to those who share our religion – to those of our state – to those of our nationality – our worlds have expanded relationally.

So I do want to remain incognito with regards to being gay tonight. If someone asked me I would not lie, that would be sending the message to my subconscious that I should feel shame. But, I will not allow a homophobic remark any stronger than Daniel needing to avoid Atlanta for all of August due to pride weekend without unveiling myself.

“Why was it so bad, we’re you raped?” I stop myself from asking, confident that he wasn’t. Gang rapes happen by groups of guys who consider themselves straight. Those pathetic repressed men would not be caught dead near a gay pride event. (To be clear, I’m not saying that repressed men are pathetic, I’m saying that guys who rape – any gender – are pathetic. Beyond pathetic.) I’m just a bit annoyed, I kind of want to know why he was so offended by the event. With so many people still scared to come-out and live their lives as themselves, the event is still essential. The fact that I often need to be invisible to be accepted and to enjoy friendly interactions shows that we really need the visibility of Pride. I’m lucky that I’m a blender, I can come in and out of that closet as desired and as the situation dictates. I can choose when to risk rejection and when not. Not everyone can blend-in the way I can.

I want the artist to know that the guy he talked with for by far the longest at this party is gay. As a former artist, I was very much intrigued by his process, his schooling, his journey. He pushed himself closer on the sofa showing me pictures on his phone after his girlfriend left us to chat. An early twenties creative-type who studied in an art program, I just assumed he would be an open-minded safe person for me, that he wouldn’t care about other people’s sexuality. But when I think about it he did attend an all-male black school. Black guys tend to be extra-closeted, I hear they have a much harder time, so he may not have had the exposure I would have assumed would come from a creative environment. There would have been lots of gay, creative people but if they were not open then that would not have created exposure. I decide to pull the conversation away from that topic before anything more is said. Because Sam is not out to his friend.

“So, you’re Brenda’s brother!” I exclaim to the person on my left and the pleasantries continue. Good. Nothing overtly homophobic was said and I didn’t need to make Sam gay by association. It is HIS CHOICE and he is not ready. I truly believe that one needs to be ready to come-out, otherwise it will not likely be a positive experience.

Isn’t that remarkable. I tend to think that the progress is nearly complete and then rediscover that there is still much work to be done. In 2014 even in cities where same-sex couples can marry, many people are still frightened to come-out and some people are still homophobic, even young creative people.

The party over, we make our way back to our hotel. It was a fun evening overall. The next day we catch a noon train back to Richmond where the adventure continues, although with a change. I had to cancel several social activities to come away on this weekend. In the end, the fellow I came with decided not to stay in touch and most of the people I met with didn’t want to reschedule. It felt like I made the wrong bet. Except with one couple, somehow going away for this weekend seemed to unplug me from the social life I was starting there. 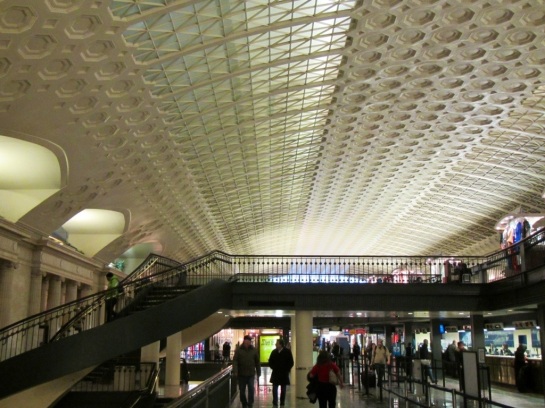 Another view inside Washington’s train station (other in part one). 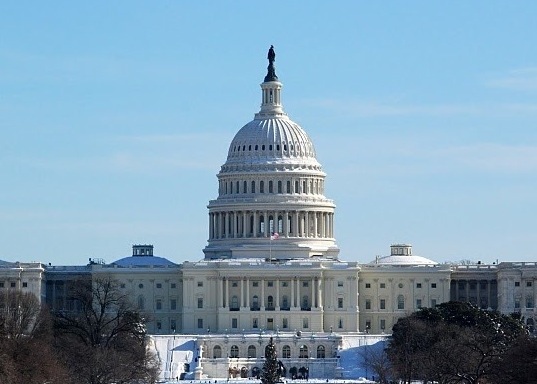 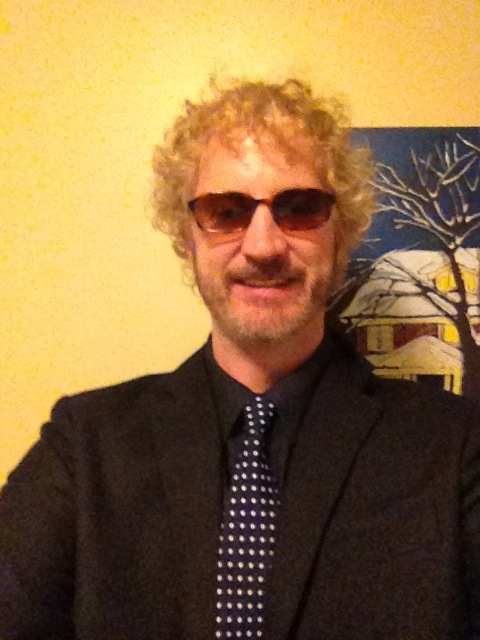 Random photo of me at my Dad’s home, where I am currently visiting in New Brunswick. Painting behind me is one I painted when I was an artist some years ago. I may show some of my works on here in the future.

Thanks for reading PersonalTravelStories.com! I hope you’ll come along for the ride by clicking on “follow”. You can unfollow with one click at any time. Cheers! Darren