The Philippines is a beautiful collection of 7000 islands of varied landscapes. I started in the main city, Manila, then took to the mountains of the north, and finally made my way south, where I am today.

My experience here has been coloured by my unfortunate reaction to pollution (mostly the vehicle emissions), but that is not to say that this is not a fantastic destination. The people are friendly, the destinations are so numerous it likely would take a year to fully explore them, and apparently they have some of the best beaches and diving in the world. If I had scheduled beaches for the beginning of my itinerary rather than at the end, I would have seen more. I ran out of time for the south being slowed down by illness. (After an x-ray ruled-out pneumonia, a doctor in Sagada told me I am, “allergic to the pollution which is causing bronchitis.” Prescribing allergy meds plus wearing filter masks made all the difference, so she was right.

Beaches are never my main interest, especially when travelling solo. If you are unable to make any friends, beaches can be quite lonely. This was the case at the beach I accidentally chose for a week in Goa where I found myself surrounded by Russians who did not feel like speaking English (except when ordering), and who could blame them. My attempts to start conversation (usually made after hearing someone speak English to a local) were always met with cold stares, like, why are you talking to me? But I had planned to visit some of the Philippines most beautiful regions which are centred around pristine beaches had my time not disappeared. (I allotted 4 weeks for the Philippines, and one is granted a 30-day tourist visa on entry.)

I had one occasion of pollution overload that pushed me over the edge here, if I hadn’t had that specific experience in Quezon city I might have been fine my entire trip. (I got caught in a fog of exhaust that had migrated off the highway onto a lane I was exploring and I couldn’t get out of it fast enough. It burned my throat and chest and the following days I was ill.) In fact, I think that is highly likely that I would have been fine with the higher emissions everywhere had I not had that specific unfortunate event. As it was, I was wasn’t fine for most of my trip. I often found myself tormented by a coughing fit after being doused by exhaust trying to wander down a road. This first happened in Quezon city as I said, then happened in Laoag, in Vigan, in Sagada, and especially in Baguio, and now here in Cebu. What can I tell you but the experiences I have had. Now I have taken to wearing a mask over my face most of the time I am walking street-side. I don’t love that, but it is necessary for me. I simply have not had time to fully recover so I relapse easily.

I arrived in Manila on January 21, 2015 and now it’s nearly a month later. This has been a travel-intensive trip, more so than any travels I have taken before. For this I spent a lot of time in buses where I could neither read nor write, but I had a lot of local experiences on those buses.

I spent my first week in Manila acclimatising to the weather (25-30C everyday, wonderful), and to the time change (13 hours different than Toronto), to the food (which is just different as one would hope, I can’t get my usual salads or grains), and to the culture. All the excitement of travel. These photos I share today are from that first week. 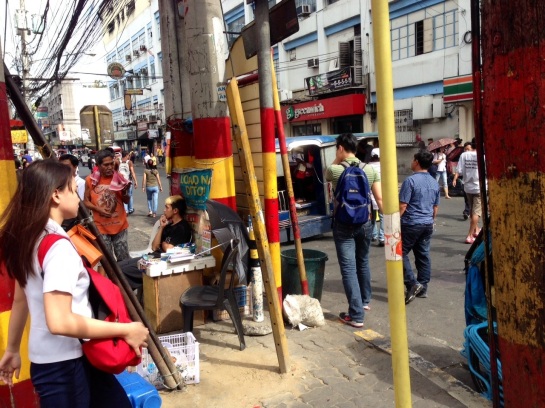 There is lots of life on the streets in Manila. 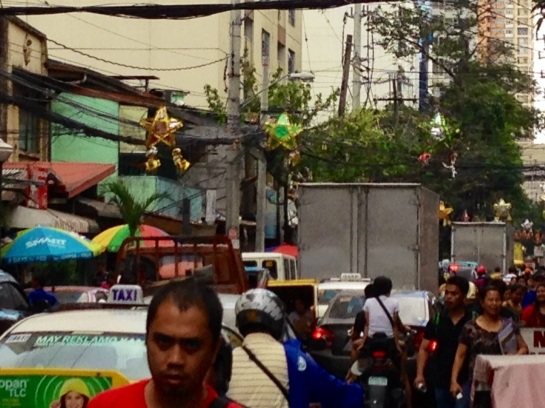 Crossing the road is often an exciting adventure.

Lots of modern buildings too, this view near the waterfront.

I think you might call this a budget dining option, closed for afternoon siesta at the moment.

I spot a kitty at another budget dining option occupying a wheelchair space. 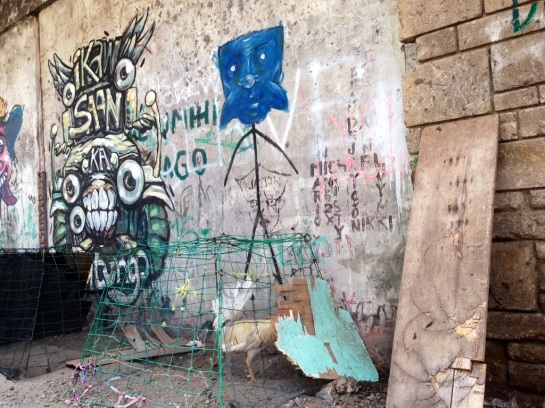 I find these kind of organic scenes actually quite enchanting.

I had to try it because from it’s name I was still uncertain what to expect.
It was basically a cheese-flavoured ice-cream popsicle covered in rice crispies.
I liked it.

I found there was a nice feeling of community in the quieter streets.

I think the owner is suggesting that one should not park there.

It would seem this is a strip where many tricycle drivers live.

This shows the style of gas station that does not have pumps in the way (I’ve seen this in a number of countries) as well as the armoured vehicles one sees around the cities. It looks like the driver has to stand-up peering out the limited vision window. Never mind theft, limited visibility trying to navigate Manila traffic, I guess others get out of the way.

I enjoy grafitti everywhere I go.

I enjoyed this lounge at the Wanderers Guest House.

What this scene needs is a touch of colour.

I hope you’ll join me for part two of photos from Manila. Mainly from Intramuros and Quezon.