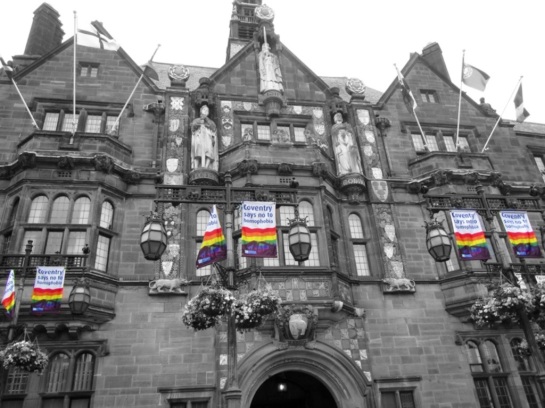 In support of the upcoming Gay Pride celebrations these banners hang in front of Coventry’s city hall.

“What are you looking for?” a kindly gentleman nearish to 60 has stopped as I stand looking befuddled with my little map of Coventry’s centre held near my face.

“Actually, I’m trying to find myself on the map.”

“I can tell you that! You’re right here!”

Only my 2nd day of driving, I had researched where to park before leaving Birmingham so that I could just blindly follow my Sat Nav (GPS) from Birmingham all the way to a specific car park in Coventry. It’s hard enough getting used to driving with all the roundabouts, I don’t want to be searching for parking when I arrive as well.

I’m getting more used to the commands on the Sat Nav built into the Audi I’ve rented. It’s completely different to how she speaks to me at home, I have the same system but she speaks American English and I guess uses different phrases as well. The one here doesn’t always recognise traffic circles and gives me incorrect directions sometimes. (The one at home probably doesn’t either, but she’s never seen one so has good excuse.) “Turn right at the square,” when it’s actually a traffic circle would have me drive directly into oncoming traffic as I nearly did the first time she told me to do this. It was right after I pulled out of the rental agency at the Birmingham International Airport. She should have told me to enter the roundabout and take the third exit, which from a crows perspective looks like turning right from the original position but is completely different in it’s execution.

Today I also learned another speech pattern that should help me to avoid going in the wrong direction in the future. “Keep to the left and then keep to the right.” I am thinking, go in the left lane, and soon after it exits, then I will need the right lane. Nope.

I left the highway going in the wrong direction on two occasions before I was able to successfully translate this command. What she actually means is, “Go into the lane that is 2nd from the left.” I am sure this is what she tells me in Canada, she has never told me to keep left and then keep to the right meaning to do these two things at the very same time rather than one after the other. Definitely a flaw in the Audi UK system. I wonder what TomTom would say in this situation.

So I have followed her instructions and by some miracle I do find myself having parked in a car park under a raised highway in Coventry. But I really have no idea where I am now, all I did was input the appropriate postal code into the Sat Nav and did my best to follow her somewhat imperfect guidance.

“Well, that is the bus station,” the friendly gentleman tells me pointing in the air, “So – you – are – – here,” he points on the map. “Do you know where you want to go from here, now that you have found yourself?” No pun intended, of course.

“I think I’ll start with the Cathedral, it’s the main sight here, isn’t it.”

“This is a sports centre of the university,” he points out, “it’s shaped like an elephant because the elephant is a symbol of Coventry.”

“Not the Phoenix? Why is the elephant a symbol for here? One doesn’t really think of elephants with Coventry?” 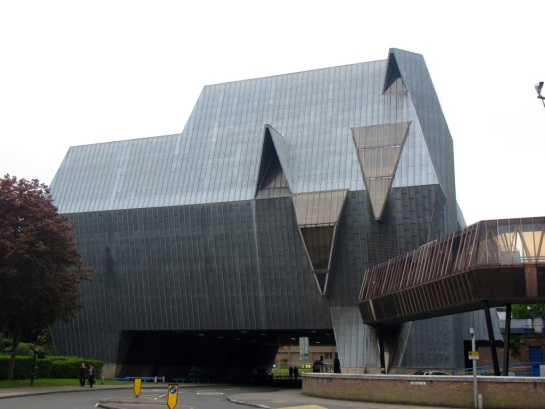 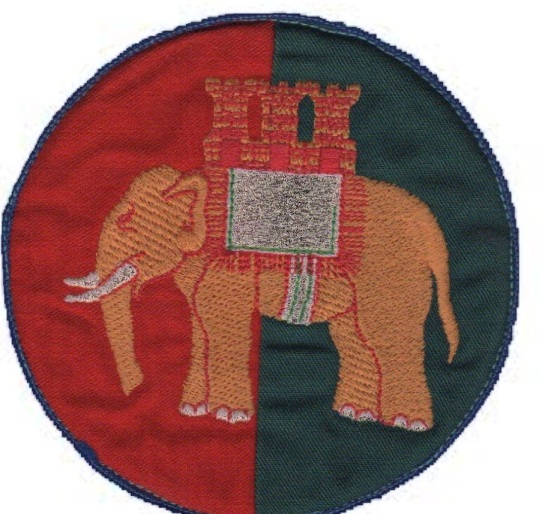 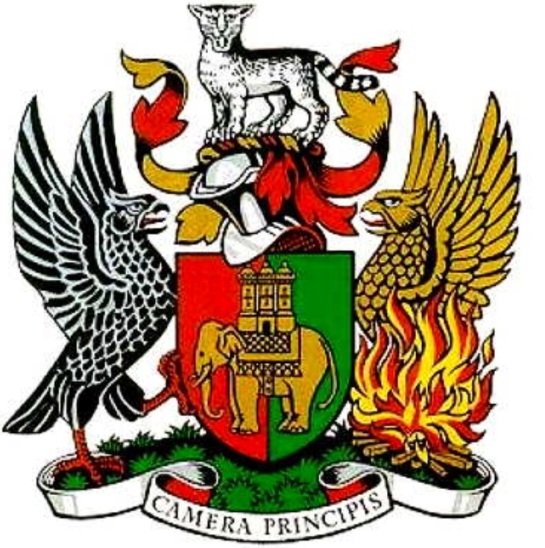 Later I went online to look into this interesting aspect that this local did not know the answer to himself. Turns out, there are a few possible explanations and I didn’t find one clearly concise definitely-true one. There is some tie to elephants being so strong as to be able to carry a castle on their backs as well as mythological explanations involving St.George the dragon slayer who was also hero to the elephants. Elephants and dragons may have been equally mythological at the time, neither ever being seen during those ages in the UK. Then there is some tie-in to Adam and Eve and my eyes started to glaze over from the reaching of some historian who I thought may have been reading more into the symbol than could possibly have been the case. Anyway, people like elephants and it’s nice to have one on the coat of arms, whatever the original motivation to include it was.

There is a an intersection in London and hence a tube station as well as a North American chain of restaurant pubs called Elephant and Castle.

(The Queen did add the Phoenix to the coat of arms for Coventry after the city had recovered from the war, as you can see above.)

We pass underneath some halls of residence, “Coventry is a University town now,” my new friend tells me as we continue up the road towards the cathedral. “Well, I’ll leave you to it,” he says cheerfully while depositing me at the entrance to the vast Coventry Cathedral and continuing on his way.

If you are looking for a lovely medieval English town then Coventry will probably not be on your hit list. Through no fault of her own. The walled city of Coventry had been one of England’s most important cities during the medieval period.

By the 1800’s cloth production was Coventry’s main industry. Nearly half the population made their living by weaving. It was a very industrious place indeed, with other manufacturing sectors cropping-up that also included the making of clocks, sewing machines, and other skilled manufacturing. In 1868 the Coventry Sewing Machine Company started making bicycles, marking the beginning of that industry for Great Britain. A motorcar company was established in 1896 and the first motorcars produced in Coventry went for sale in 1897.

The city was a centre for skilled workers and engineering. People came to work in Coventry from all over the country.

The amount of industry and rapid growth meant that Coventry was not a clean, comfortable place to live. In 1838 and 1849 there were widespread Cholera outbreaks owing to the lack of fresh water and open sewers. By 1840 very few homes had a fresh water supply. One in four children died before the age of one from Tuberculosis.

By a thoughtless move of government in 1860, England signed a trade agreement with France making French ribbon cheaper than Coventry ribbon. Overnight a thriving industry went from boom to bust as they were suddenly completely unable to compete. Weavers went without work, many emigrating to America and Australia. Several manufactures went bust. The industry never recovered.

Other industries continued to thrive, however. Regardless, it wasn’t an easy time for the average worker, many did live in poverty despite working very hard and for many hours. The city had doubled in population during the reign of Queen Victoria, leading up to 1901. By this time things were improving, infrastructure for water and sewage and utilities was was getting better-and-better. Some people now had not only water and sewer access, but also electric lights and telephone connections. The first films were shown in Coventry in 1901. This marked the beginning of a decade of unprecedented growth.

Things were looking pretty good for the hard-working citizens of Coventry until their industriousness brought them great hardship. Located near to the Black Country with a ready supply of coal and metal-work supplies and with a skilled manufacturing workforce making cars, machines, and tools, during wartime Coventry was a natural place to make ammunitions. Coventry found itself a very bright target of the Nazis.

During the war, Coventry suffered 41 separate air raids. The raids seemed not to be only in focus of factories but were all encompassing. On one night in November, 1940 the city was terrorised like never before and was nearly completely destroyed overnight. In fact, the event even left an impact on the German invaders who ended-up coining a new verb to capture the magnitude of the event that means “to flatten”, coventrieren.

After the war was completed, city planners of Coventry strategised how to best move their city forward. The city centre was defined into three sections: a pedestrianised shopping zone (“where women and children can go about their activities without the danger or cars”); a university zone; and a civic zone. All this would be encircled by a ring road with car parks so that people could park conveniently for the central area without having to drive into it.

I’ve said before, I love Great Britain’s pedestrianised areas. I cannot grasp why North American city planners do not see the virtues of having these areas, which are so very rare on that continent.

The city was built leaving the traditions of building behind, which took much longer to construct. Instead, modern building techniques were embraced to put people in homes and get the city up-and-running as quickly as possible.

The new buildings are not pretty, plain, concreted boxes and straight brick structures. But, many people were quickly housed and they enjoyed more comfort and amenties than ever before. The medieval city was lovely to behold, but not comfy to endure. The new cookie-cutter faceless constructions were necessary, and anyway, it would have been impossible to replace many centuries of building any other way.

St. Michael’s Cathedral was built around 1300. The destroyed remains have been preserved as a memorial of Coventry’s worst hours and as a symbol of peace and reconciliation. I am much reminded of the Peace Park in Hiroshima as I walk in the open air where once I would have been inside a grand cathedral.

Coventry Cathedral is a massive structure joined to the old cathedral’s walls. It is a very modern style with towers of stained glass windows. A statue hangs on an exterior wall of the devil being conquered by St. Michael.

Some walls of the original cathedral remain standing creating a courtyard before the new Coventry Cathedral that is attached to the original walls. 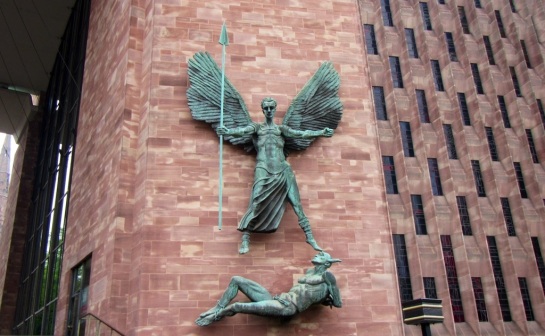 I take some pics of nearby buildings, a few have survived including St.Mary’s Guildhall. Here one can enter a room once inhabited by Mary Queen of Scots who had been ordered detention within the secure walled city of Coventry. 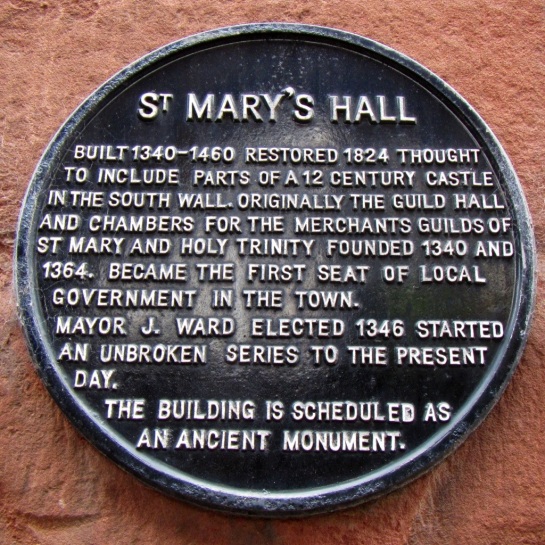 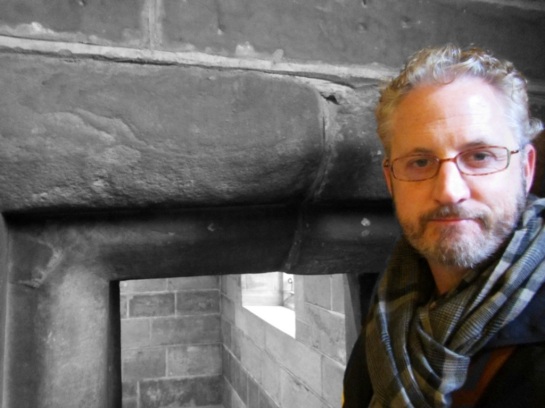 The doorway into the room supposed to be the temporary home of Mary Queen of Scots is quite low. 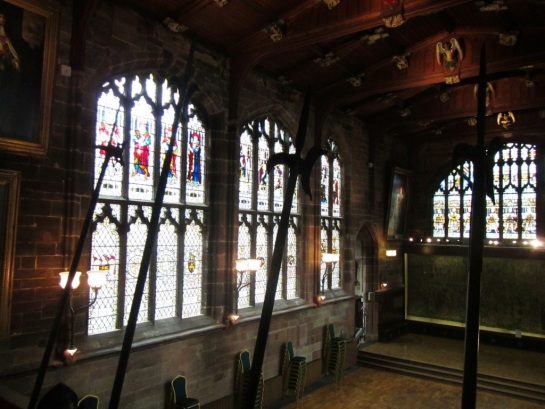 A visit to the nearby Herbert Art Gallery and Museum was very informative and the source of much of my information about Coventry. 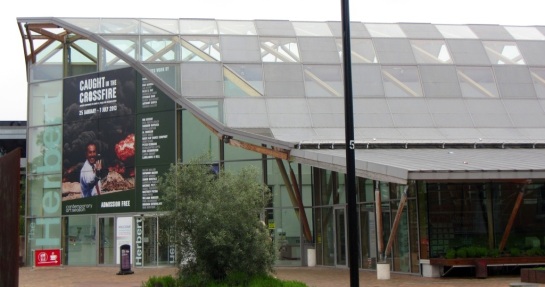 A Jacquard Loom from Leicester’s era of ribbon making. This equipment looks complicated to me today! Very impressive!

Time for lunch, I headed into the pedestrian zone where I chose an open air seating area to enjoy a simple sandwich and coffee. In the open square known as Broadgate, a statue of Lady Godiva stands in the centre and an automated clock tower has an entertaining procession of her riding around the balcony naked on her horse.

The story has it that in the 11th Century Lady Godiva, the wife of a nobleman, rode naked through the streets of the town in protest of her own husband’s harsh taxation on the common people. The phrase, “peeping Tom” is said to have come from this event, and in the clock tower a peeping Tom takes a good look from the window above. 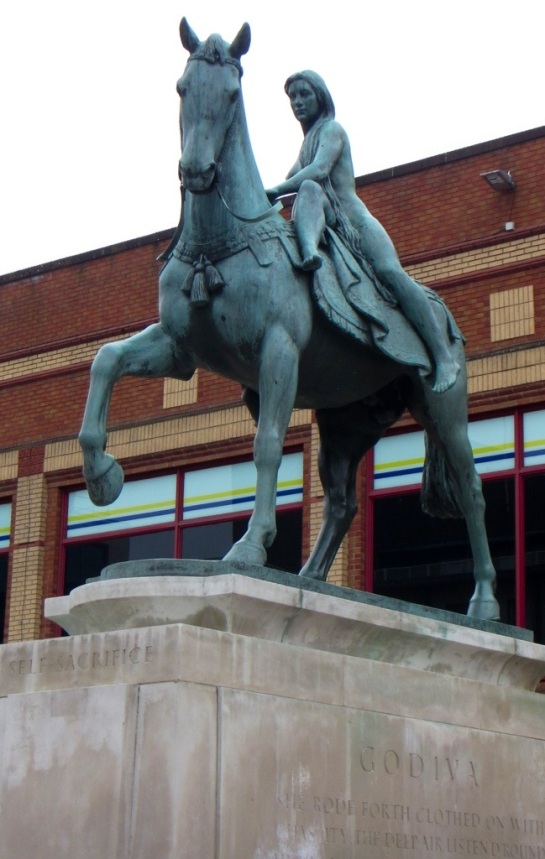 Coventry has a lovely little downtown. After exploring it to my content I made my way back to the car where I programmed the location of my Warwick hotel into the Sat Nav and away I went continuing my journey. Warwick will be my home-base for the next few days while I explore it and some other areas nearby.