City of 2 million people, Phnom Penh is the largest in Cambodia.  I enjoyed wondering streets and exploring, though I was constantly aware of the potential for mugging and bag snatching.  Not only had I read about this and heard the stories, I witnessed a first-hand account on my first day I was getting a Sim card installed in my mobile phone.  As I was in the mobile phone store another foreigner ran in to the store declaring that her bag had just been stolen with her phone inside.  “This happens all the time,” she told me, “my strap was cut.” 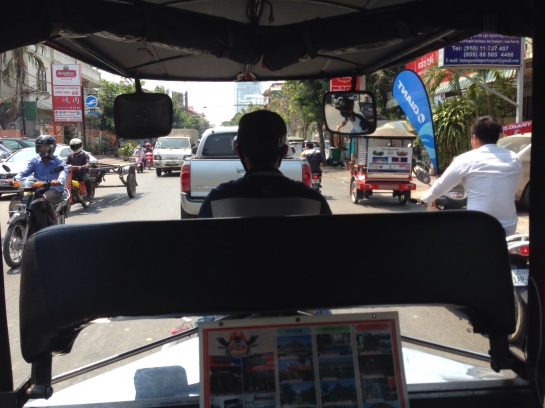 Tuktuks were my preferred way to get around city.  Motorcycle taxes were common and half the price but there was no way to tell whether it really was a motorcycle taxi or just some guy with a motorbike.  Anyone with a motorbike could take me anywhere if I agreed to join him.  Of course this is also true of tuktuks but at least it seems purpose-built that it would be his job to transport people. 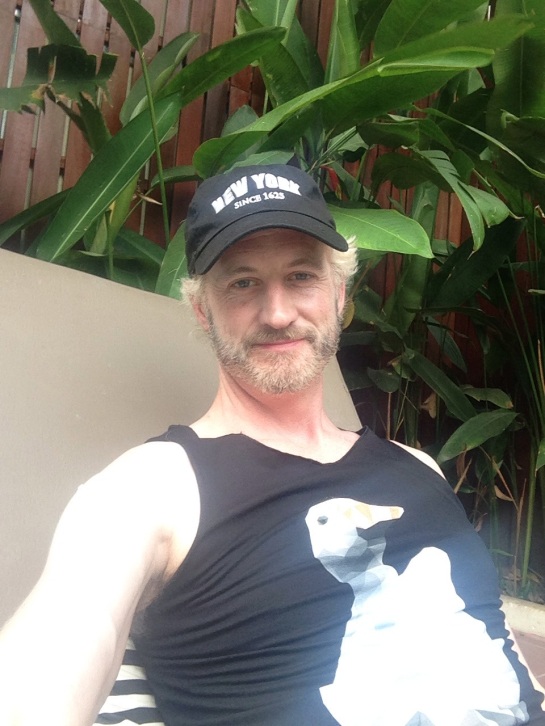 The daily temperature rose to between 35 and 39°C.  This is not usually my thing but I ended up enjoying the hotel pool every day.  Fortunately it was a salt water pool and had far less chemicals to damage my skin.

Click below for a video talking about my insecurity of swimming in public.  I am getting better with this each time. 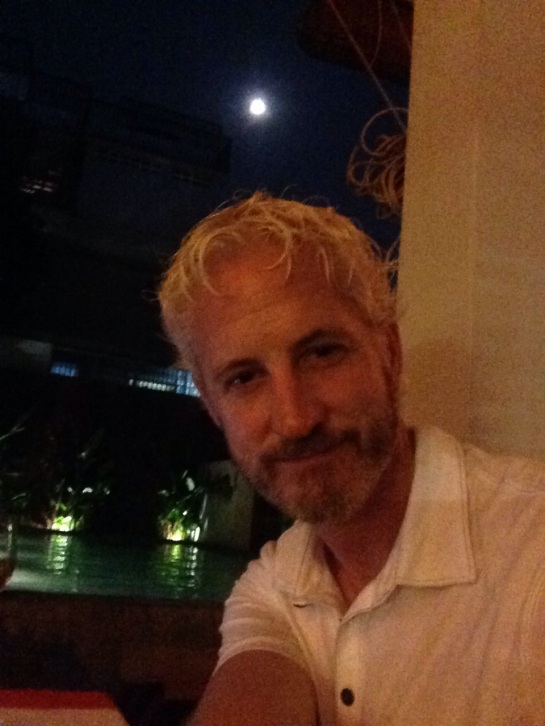 It is not recommended for one person to be walking alone after dark in this city.  I agreed and spent most evenings dining in my hotel.   I do take certain types of chances but in this case better safe than sorry.  Statistics were definitely against me.

I left all cards and ID in my hotel and only carried cash. 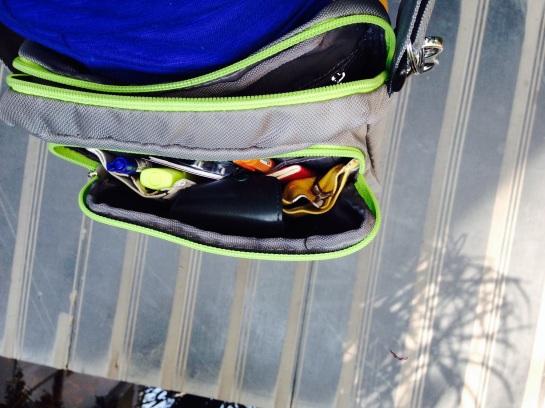 I also broke that habit of bringing my iPad everywhere.  I walked around with my bag gaping open so that possible thieves could see there was no reason to steal my bag.  I had to carry water, maps, and eyeglasses.   I was told my phone was most safe in my hand or pocket.  But I met another foreign girl from England who had her pants torn apart after she put her cell phone in her pocket.  In quickly retrieving her cell phone from her pants the thief ripped her pocket off her pants in the not-so-gentle process.

Click on the image below to see video of the same.

I was wandering around looking for lunch quite hungry in the 38°C sunshine.  Soup like this, even if the venue is not overly hygienic, tends to be a safe choice if you can see it boiling.  But I was feeling overwhelmed by the heat and I moved along. 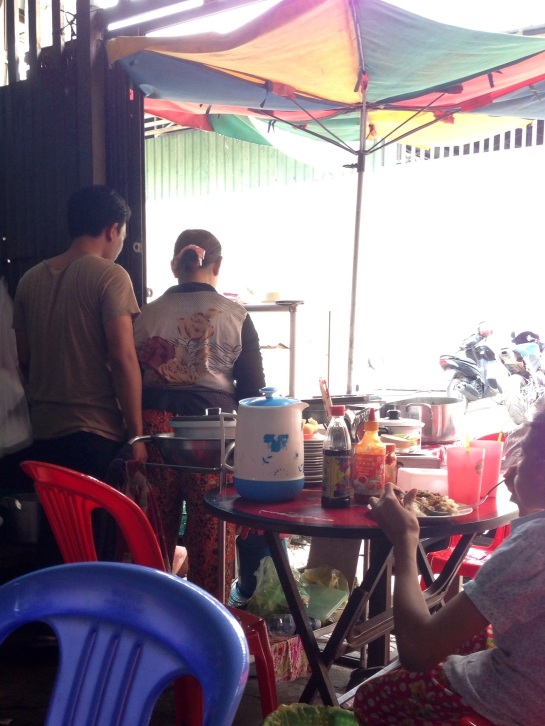 This is the view from where I was sitting at the place I did choose.  My stopping caused quite a stir of excitement as the woman called for a family member who could speak English.  A tiny bit.  Not used to foreigners, it took them a few minutes to seem comfortable again.  This was clearly a home based business with baby and grandma watching television on a bed in the same room.  There were clothes here and there and personal effects around.

Click on the image below to see a video 360° from where I was sitting.  It’s a bit fast but I was trying to be inconspicuous.  Grandma and baby were out at that moment.

I would say there are a variety of lifestyles in the city of Phnom Penh.

I often walk by people doing dishes by the side of the road , but rarely do I feel comfortable taking a photo .

Click on the image below to see video of this from afar.

This is some sort of delectable animal products being dried out for a streetside restaurant.

This photo shows the location of where they are being dried in the sun.  During rush hour I felt the need to wear my mask walking down this street, so there might be some chance of pollution absorption.

In this scenario I was walking down a street of shops and suddenly encountered a bit of rubbish .  it’s not as bad as it looks.  Okay, maybe it is.  But later I was walking down the same street and there were multiple people sorting the trash.  So I think maybe that stretch of street is simply used as a trash sorting depot even though it’s just a normal street.

I took this photo after having a funny experience at this shirt shop.  Many businesses are home based businesses and in this case the family lived in the shirt shop.  The shop was clearly run by the wife and the husband had to come home for lunch when I was there.  Unknown to me, because he is an official he had changed his clothes to have his lunch break.  When I saw that particular shirt I thought it would make an interesting costume, I assumed it must be from nearby Thailand or Vietnam so I tried it on.  I was mistaken. 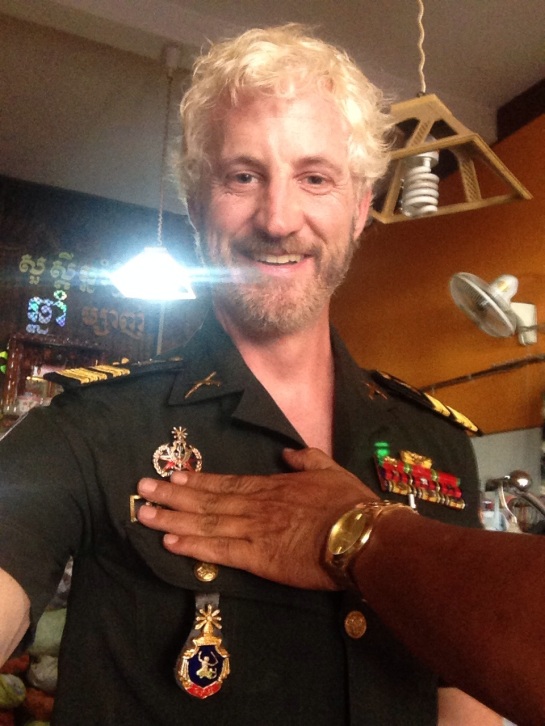 When he saw me wearing his uniform I thought he was going to wet his pants.  He was screaming-laughing in disbelief.  He called everyone over and took my picture.  It seemed like I was a celebrity until it hit me what was happening.  When I went to take a photo as well he covered his name tag quickly.   I was probably very fortunate he was so good humored. 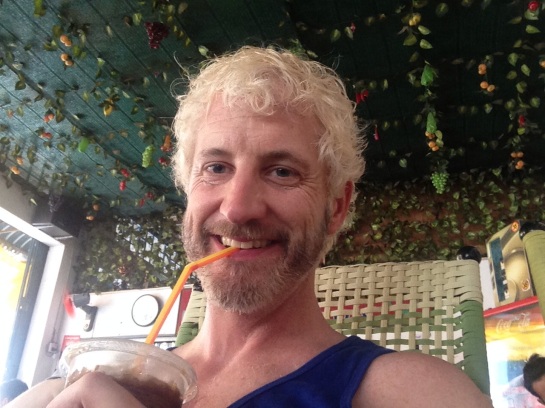 Usually when I have iced coffee I go to the air-conditioned places I recognize to escape the heat for a few minutes.  On this occasion I stopped at a typical local coffee shop.

Click on the image below to see this coffee shop better.

Back at the hotel wearing my new shirt from the soldiers wife’s shirt shop.

Click on the video below to see the helpful pedestrian walk lights! When working better, they don’t just walk but they run as they’re running out of time. This one was a bit defunct. Some work a bit more effectively.

Okay, that’s enough for today. Thanks for visiting and I hope you’ll join my adventures by clicking “Follow” and entering your email address. Cheers! Darren