The Bronte Parsonage in Haworth
.

The Bronte Parsonage in Haworth

I pull away from Leeds in the direction of Haworth on a Sunny Wednesday in late June. The city suburbs continue for quite a while as I make my way upwards with ever increasing views. I am able to pull over to capture one of the views, but most of them escape my capturing with traffic behind me and nowhere to stop. It’s a lovely drive nonetheless and a beautiful day to enjoy it.

I arrive to the Bronte Parsonage before noon and enjoy a wander about the home where the famous Bronte sisters wrote several of their greatest novels. The Bronte sisters had a vague notion that they would receive less credit as authoresses so Anne, Emily, and Charlotte all published under male pseudonyms.

The Bronte family had moved to Haworth in 1820 when their Dad, Patrick Bronte, took the position of perpetual curate of the Haworth Church. Hardship soon followed with the death of Mrs.Bronte and of his two eldest daughters all within the first 4 years. Thereafter the Reverend decided to keep his remaining three daughters and one son close-at-hand. They were home schooled in a very creative environment.

From all accounts the Bronte home sounds to have been a warm, safe, nurturing home. Despite growing-up without a Mother, the Brontes seemed to live lovingly. Servants were considered an extension of family. The girls would sit in the warm kitchen and listen to stories from their maid, an older woman who started with the Bronte family when she was 52 but who in fact outlived most of them.

As part of their creative pursuits, the Bronte children enjoyed writing little books. The first ones were perhaps made for Branwell’s little toy soldiers and were penned so tiny as to be suitable for the tiny fictitious readers. All had a penchant for writing apart from Branwell who became a painter.

There was a school set-up for clergy’s daughters where the Bronte sisters were able to continue their eduction beyond home schooling. They also worked as governesses before finding literary acclaim.

The three ladies went on to become three of the most important literary figures in history. 1847 saw the publication of Jane Eyre, Wuthering Heights, and Agnes Grey. The sisters would spend late lights writing and reading their works to each other with discussions in the dining room as they honed their craft. Their brother died the following year from tuberculosis and soon after Emily was taken by the same disease. When Anne also contracted TB, Charlotte took her to Scarborough with hopes that the seaside cures would help her condition. Sadly, they did not and Anne was soon buried in Scarborough in 1849. (You can see some views of Scarborough in one of my postings from the day I visited Whitby and Scarborough. Just click on the destination to find it.)

Charlotte married despite having misgivings. She and her husband lived with her Dad at the parsonage I visit today. Sadly, in 1855 Charlotte was also taken early during her early months of pregnancy so that poor Reverend Bronte outlived all of his six children.

Incredible views leaving Leeds in the direction of Haworth.

Most visitors will arrive to Haworth at this train station.

Standing in front of the Bronte home. The addition on the right was added by the next curate of Haworth who had his own private income. 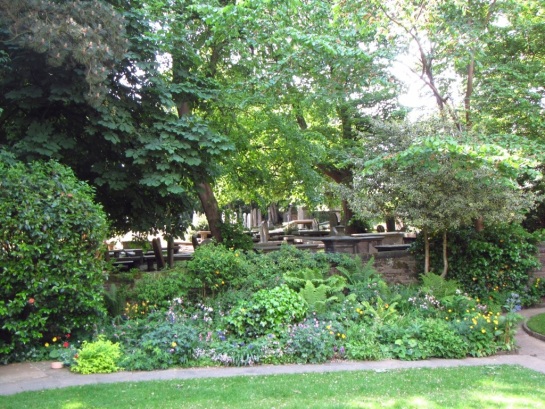 The garden is heaped with graves. They did not understand the dangers of grave seepage and this was definitely an issue for the water supply here where the graveyard was filled to overflowing. 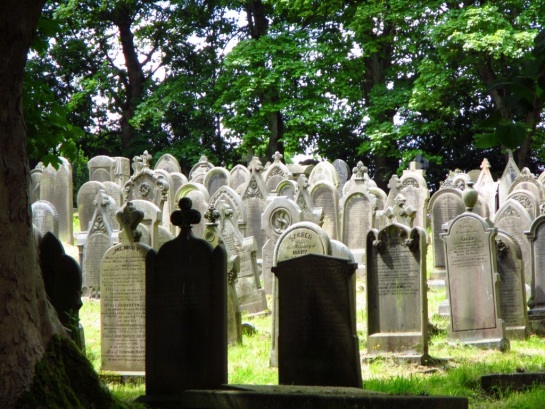 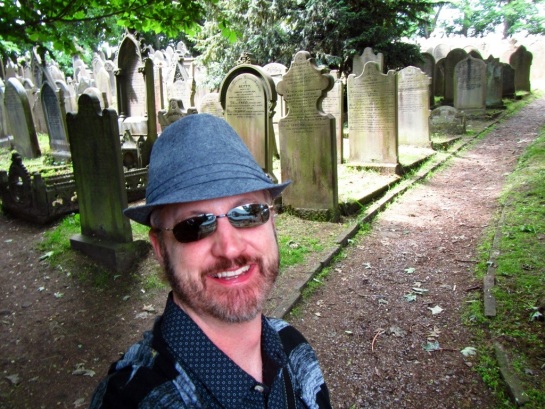 Fun times in the graveyard between the church and the Bronte’s home. 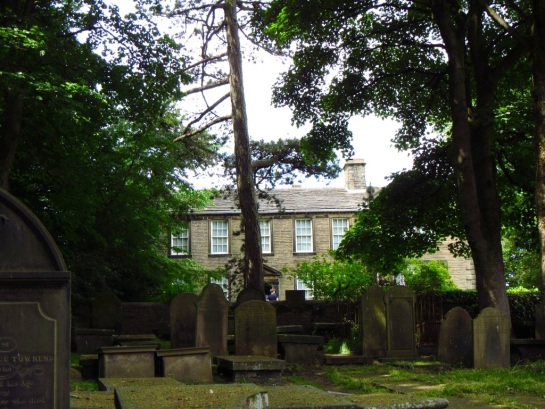 A view of the school from the other side. 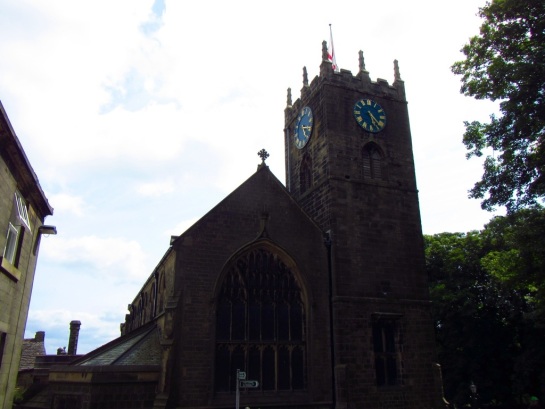 The church where Patrick Bronte was curate was replaced a few years after his death with this one. 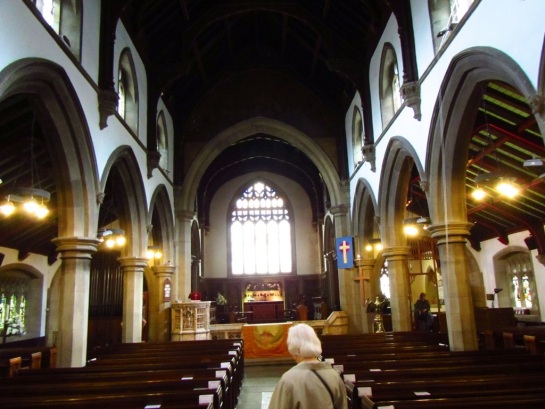 The village is right on their doorstep just through this alley.

This view from Haworth Church gate of the Bronte Parsonage.

The main street of the very picturesque village of Haworth.

Some views around Haworth. 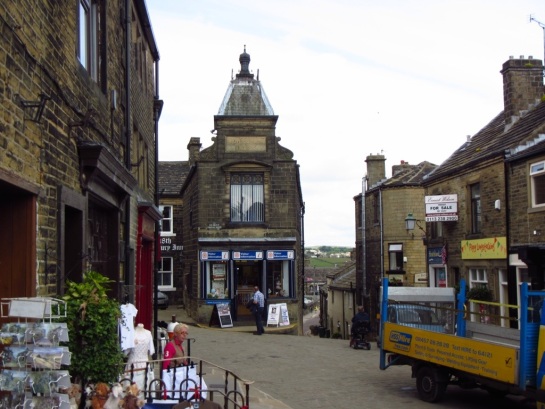 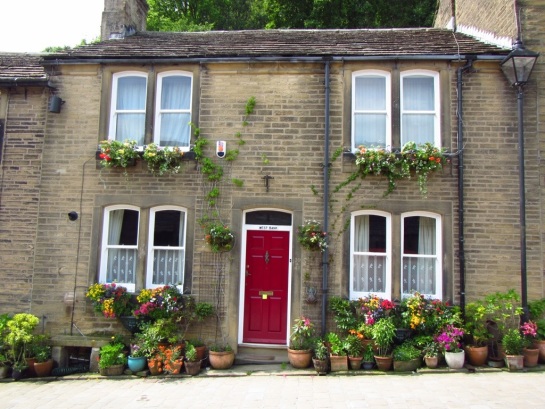 During the time of the Brontes, Haworth’s main industry was looming. A large cottage industry where many people worked on looms in their homes. 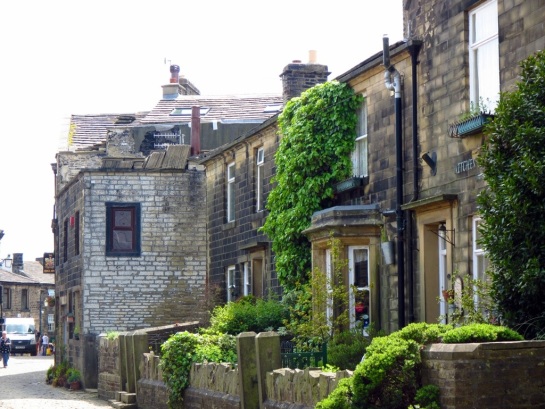 I take my lunch at the Cookhouse where I sit on the patio and soak-up the lovely ambience of Haworth.

Sadly I have saved no room for dessert as the “cheesy bake”came with a good portion of garlic toast and salad. The service was friendly and swift. My server has relatives in Canada and I think she is probably a future-traveller herself. 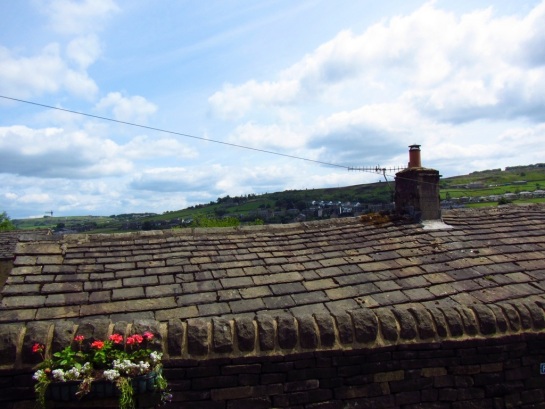 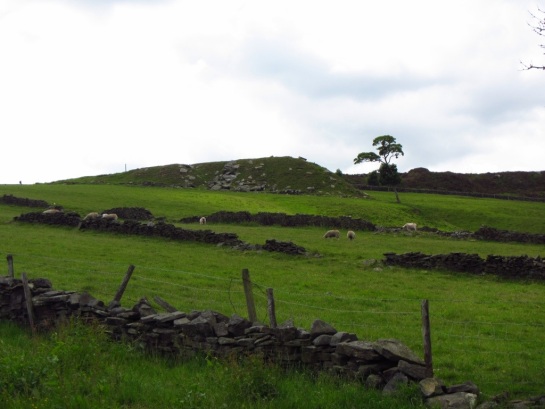 These lovely meadows are actually directly behind the Bronte Parsonage and visitors can walk along the periphery. 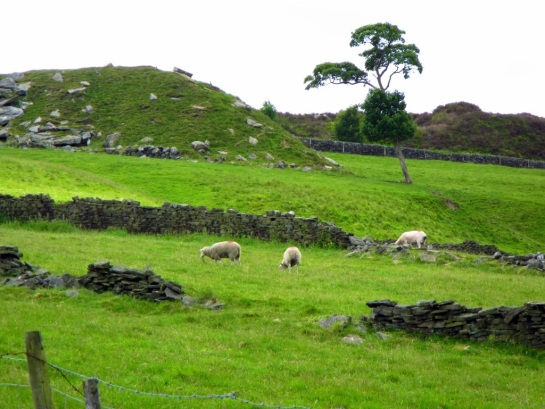 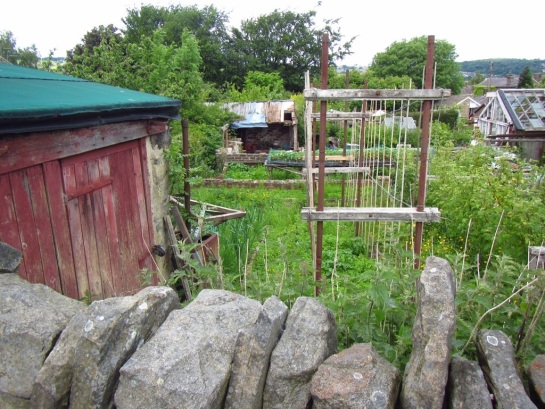 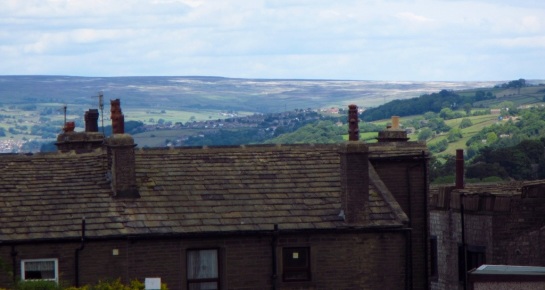 I leave Haworth going out the opposite of where I entered as I came from Leeds but I’m going to Manchester. I pulled-over at the edge of the village to take-in some more glorious views. 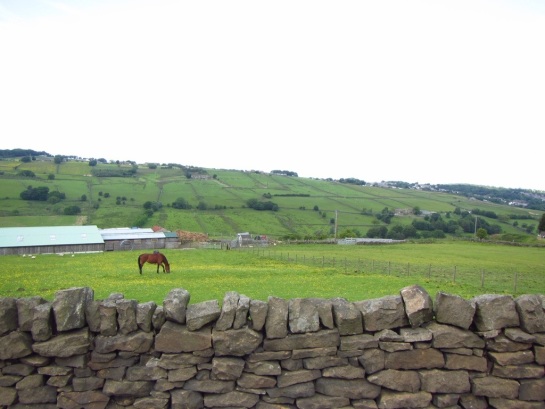 I stop again only a few minutes out of town to take in more of the amazing views. 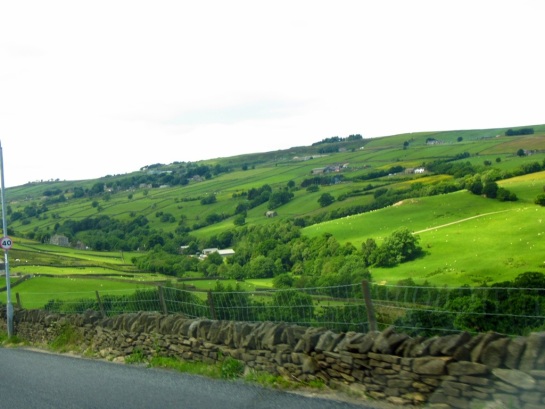 Some of the roads were narrow for my North American standards, but if you are driving between Manchester and Leeds this route is longer but just incredible. Even if you don’t have time to visit Haworth, the drive alone is an absolute treat. 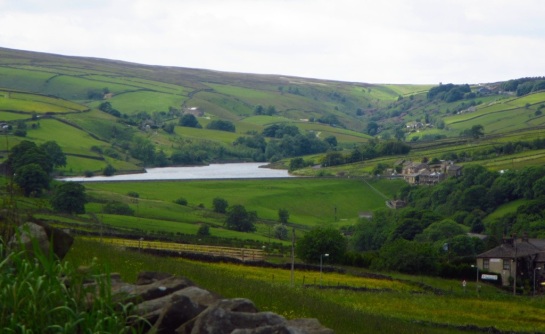 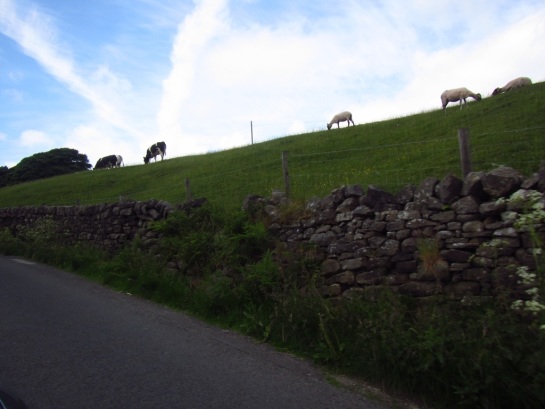 I feel like I am driving through time stood still, so beautiful are the country pastures.

If I had to guess, I’d say that Laneshawbridge has a population of about 7. I think there were 2 homes, give-or-take.

The image below is a video. If you click on it you should be able to view a 360 degree view from where I was standing. 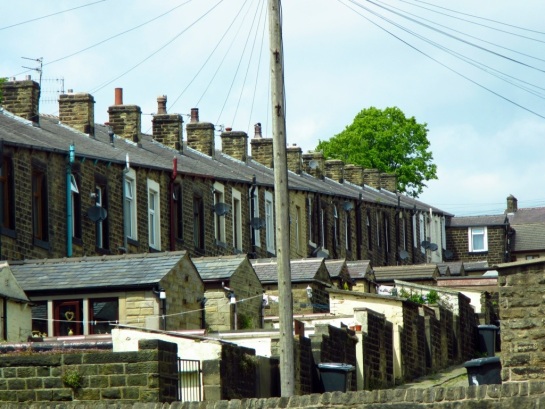 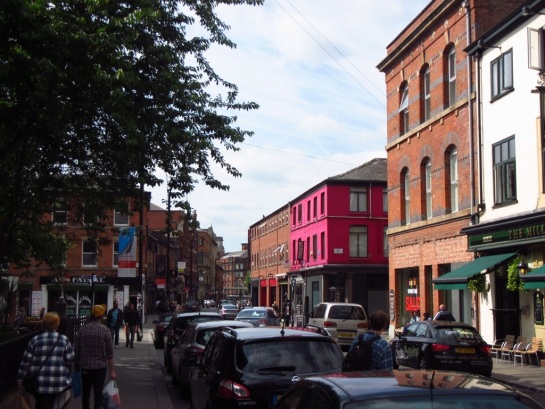 Arriving into the Northern Quarter in Manchester where I will be staying 3 nights above a pub.

Click here for a link to a video slideshow of my Day including the lovely countryside and Pennine moorlands between Leeds and Manchester via Haworth.

I finish my day in Manchester where I will make my home above a pub for the next few days. My first pub stay, it should be interesting.