I sit at a cafe on a Sunday morning watching a steady stream of people going up and down Birmingham’s New Street. The centre of the pedestrian zone in Birmingham’s downtown, New street is a lovely cobbled area that links Victoria Square on one end to the Bull Ring on the other.

Stately buildings and fountains that have welcomed visitors for many years flank Victoria and Chamberlain Squares and lead pedestrians onwards through the Paradise Forum and along Broad Street. The new, controversial library (I like it, but many don’t) can be seen from far away, the Rep Theatre, the very well-used Symphony Hall that was opened by Queen Elizabeth herself in 1991. Beyond is the lovely area of Brindleyplace which takes full-advantage of the somewhat recently refurbished canals. A photo showing the area in 1970 is barely believable. It looked like an industrial wasteland. This had been a coal city, but those days are long gone. Perhaps that is what people think of when they consider Birmingham? The reputation of this city comes nowhere near to the actual glory of what Birmingham has become.

Turn left at the head of Broad Street, or follow the canals over to The Cube and The Mailbox. These are other impressive centres I have already written about.

At the opposite end of New Street lies the Bull Ring. Far from being the bull ring that it was in Roman times, this is a modern, sophisticated shopping zone. This area, too, has been transformed in recent decades. An ugly 60’s concrete shopping mall has been replaced by state-of-the-art architecture presenting all the brands one could ask for. From budget stalls of the markets below where traders rent spaces indoors and out to hawk their new and used wears, to the high-concept spaces and couture fashions available inside the main centre, this shopping district offers something for everyone.

One can sip a £3 latte at a chain shop or a 50p coffee from a caravan. St.Martins church remains the one thing still original, behind which stands the glorious sculpture that is Selfridges Department Store.

I spent my first week in this lovely city staying at a hotel by the Paradise Forum, the area between Broad Street and New Street. I would recommend this area for a visitor as it is not only convenient for daily wanderings in Birmingham, it is also near to the New Street Train Station for wanderings further afield. The other main stations of Moor Street and Snow Hill are in close proximity also.

For my second week I stayed in the Jewellery Quarter. This was once more industrial than today, where numerous companies made jewellery. Today, there are more than 500 jewellery shops making this a popular destination for couples-to-be. There are more than 200 heritage listed buildings in this district. The canal network is easily accessed for quiet city wanderings where one feels suddenly transported into the country by descending only a few steps and putting on some headphones.

I did not know what to expect when I decided to visit England’s Second City. What I do know now is that it seems a wonderful place to me. With friendly locals and a plethora of cultural activities to appreciate, this is a place that I could call home. I think it is well worth a visit. 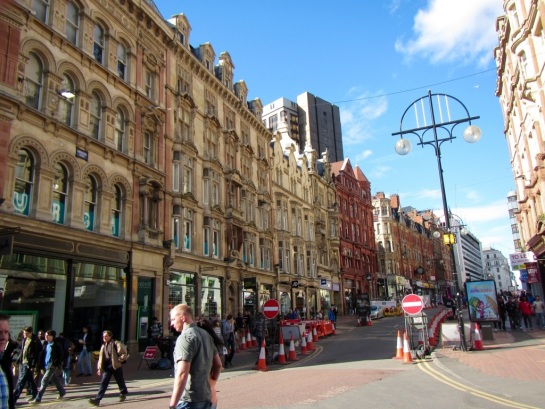 New Street is a central pedestrian zone that ties to other pedestrian side-streets and creates a wonderful hub of activity in Birmingham’s core.

A side-view of Victoria Square, which lies at one end of New Street.

The famous Bull sculpture outside the Bull Ring Shopping Centre. 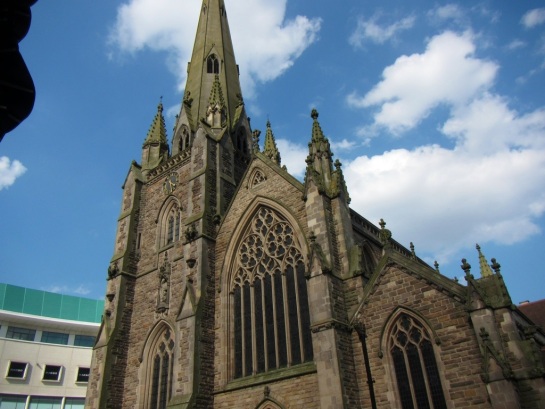 St.Martins Church at the Bullring.

A view of Selfridges Department Store at the Bull Ring.

Chamberlains Square, home to the Birmingham Museum and Art Gallery and Paradise Forum which leads to Broad Street, is connected to Victoria Square.

The colourful building in the middle is Birmingham’s new Public Library opening in the fall of 2013. 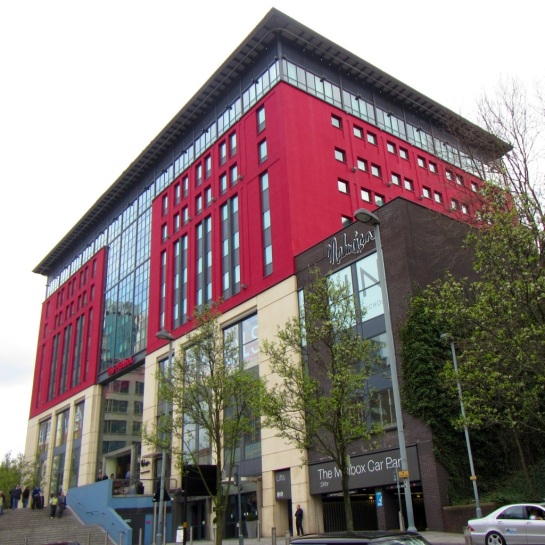 The Front of The Mailbox. I have written more about this structure in other Birmingham postings. 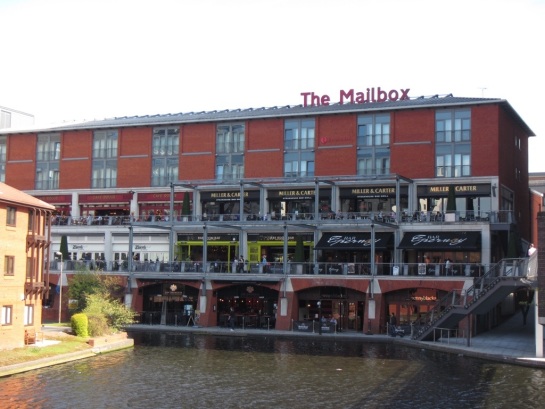 The far end of The Mailbox enjoys canal views and leads on to The Cube.

The 25-storey multi-use building known as The Cube.

The Jewellery Quarter is a very special area consisting of many heritage buildings. It is considered a special neighbourhood even for Europe.

If you have enjoyed this overview of Birmingham I hope you will take a look at my other Birmingham postings! And please, click below to share this link on your Facebook! Cheers! Darren