It’s always a shame when travelling to happen upon folks who rub you the wrong way. She hands me some brochures while telling me about the local sights. I open one as she continues speaking, waiting to ask a question about St.Fagans. “If you’d rather read the pamphlets than listen to me then I don’t need to help you, do I,” she blurts in an overly-sharp tone. “Sorry,” I say meekly, making eye contact again. She continues her regular spiel regarding all the various sights that are of no interest to me whatsoever before I get to ask my questions. I have done some research, I already know what sights are of interest to me. I am not the ignorant North American she has pegged me to be.

“I’m going to the Big Pit tomorrow, and I’d like to take a general Cardiff Tour as well as visit St.Fagans.”

“You could do the hop-on-hop-off tour tomorrow and go to the Big Pit on Monday,” she suggests.

“But the Pit is only open on Saturdays now, so I have to do that tomorrow or not at all.”

“Oh yes, that is true.” So helpful she was. That would have been really fun making my way out of the city to a closed coal mine made tourist experience. It’s a big attraction, she had to know that it’s only open one day a week this season. Perhaps she wanted to punish me for being a poor listener to her dribble that she didn’t even sound interested in herself.

My next stop is “The Wales Centre” across from the Castle entrance where one books walking tours. Also I am desperate for a loo so I have in mind to ask for that as well.

The gruff man at the first counter to the right of the main entry is defensive about the walking tours. I have shown no frustration or shortness whatsoever regarding their apparent disappearance when he informs me that there are no tours happening at the moment. Not his fault. He hasn’t heard anything from the guides that work out of this location. This he reiterates three times before answering his now-ringing phone.

Still needing the washroom and him being on the phone, I make a move to the counter around the corner where I ask a younger staff member where I might find a WC. The older man puts his hand over the phone receiver and yells over aggressively, “He won’t know any better than I!” Judged by another tourism representative, this time as being someone who would not believe him, so pushy that I would not accept no for an answer and would try his junior for the same information. I am finding Cardiff defensive and harsh.

“Buy your bus tour ticket before you go into the castle so that you can get a discount by showing the ticket” I am told so that I purchase my ticket in advance of needing it. “Sorry, I can only discount after you have taken the bus tour, ” I am told at the Castle Admissions Desk, “they will exchange your original ticket for a different ticket after you board. That other ticket is the one that can get you a discount.” For some reason, the original purchased ticket, a different piece of paper for the very same thing, is not adequate. I sense a fondness of red tape. And the tourism rep outside who convinced me to buy my ticket early so that I could use it for discount now, has he never heard of this rule? 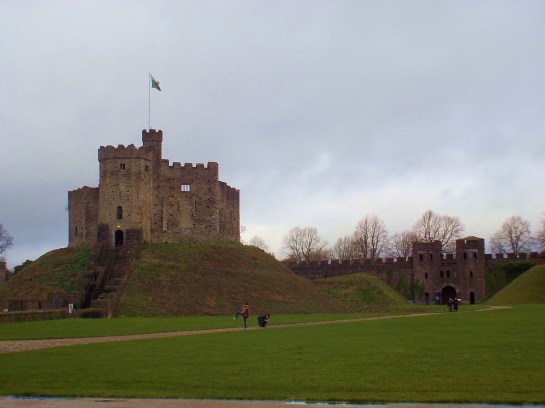 Set inside the original library of Cardiff built in 1882, the Cardiff Story is an “abbreviated interactive display’ of Cardiff’s long history. Sharing the building with the Tourist Information Centre where I was so happy to leave, I put off going to this exhibit until a few days later. Basically it was after I had completely run out of other things to do.

The area that makes-up modern day Cardiff has known history dating from 2300 BC. The first Roman settlement built here was in 55 AD. In 1081 the Normans occupied Cardiff and by 1307 the population stood at 2000 people.

Some other notable dates and facts include:
-In 1884, The first International Rugby match was held at Cardiff Arms Park, a legacy that continues today with Rugby matches bringing in loads of tourism pounds.
-In 1886, The Cardiff Coal and Shipping Exchanged Opened, which was the beginning of Cardiff’s main industry.
-In 1905, Cardiff became a city.

Cardiff’s inherent success peaked in 1913, that year saw their highest coal exports. Cardiff was the greatest exporter of coal in the world, mined in the Welsh valleys. The first cheque ever written for £1m was written here in 1901 as payment for a 2500 tonne coal shipment to France.

Eventually the price of coal fell below the cost of local production. In 1926 workers faced a pay-cut and additional hours to keep the industry viable. This did not sit well with the unions and strikes ensued. Decades later, the industry entirely collapsed leaving Wales in very poor shape with very little secondary resources to draw upon. Miners were not highly-educated folk and neither were those in the shipping trades adequately prepared to face new careers.

Wales became a dependent of the UK. From 2007 and 2013 Cardiff was very fortunate when buckets of EU money came their way salvaging the city with mega improvements allowing it to become a new centre for shopping and tourism. (Wales received 1,900,000,000 Euros during this period, that’s 950€ per capita.)

Today, Cardiff has the 5th major shopping zone in the UK set in a very small city of only 340,000 residents. This is a very unusual situation given that being the 21st most populous city, nature would suggest it having the 21st largest shopping zone. It is highly international and it’s also a university town, with 42,000 students in 2012, that’s more than 1 in 9 people in Cardiff. With such a plethora of students as well as a vibrant pub culture, Cardiff is definitely a place to come to party. Several streets close to vehicles on weekends for the safety of stumbling revellers and great crews of cleaners descend on the city in the wee hours of the morning to clean-up the night’s mess.

An amusing section of the Cardiff Story to me was a wall display titled, “Cardiff: A view from the Valleys”. Here’s a very brief summary: Unless they love shopping, they don’t like Cardiff. I am unsurprised, Cardiff is nothing like what I expected and I hope to eventually discover that it shares little in common with the rest of Wales when it comes to the feeling on the street. I have met many lovely Welsh people during my travels, but very few in Cardiff.

A series of 6 slideshows with voice-overs provide six perspectives of the city. I press the English and Welsh language buttons for each story, in not one case is the voice the same in both languages. Only 20% of Welsh people can speak the Welsh language, and fewer still use the language for primary communication. This is definitely a subject of contention, do not suggest that signage need not be in Welsh due to the fact that the very few Welsh speakers mostly speak English. This is not a subject that they want broached, their language is a source of pride and many Welsh people seem to feel guilty for not knowing their “native” tongue or they take courses hoping to some day be able to speak it, needed or not. It is fortunate that they can afford the bilingualism that they do enjoy with regards to public services and such. It’s nice that the money needed to support such language protection is not needed for other social services that would benefit Welsh society, I mean that would benefit the more than 80% who don’t benefit from language protection of a language they don’t know.

I wrote down the narration of one of the 6 slideshows, verbatim:

I go to Cardiff on the train. I don’t go a lot ’cause I don’t really like it, it’s so busy. And it’s just not my type of place really. It’s a bit annoying. It’s tiring going to Cardiff. It’s a bit much to travel down there all the time on the train. You get there and it’s just hustle everywhere. You can’t move. There are too many people about. I usually go there with my girlfriend who wants to go clothes shopping as most girls do. We end up going to all the big clothes stores. It’s fun for her because it’s what she wants to do but I end up getting dragged around and I don’t enjoy myself. There’s nothing for me to do. When I go back on the train I have to catch a bus to where I live. I just feel a lot better when I get off the train, feel like I’m home home again, it’s weird.

Well good for Cardiff for having such honest opinions given in their “interactive” displays. (Interactive meaning that you push a button, and the display does what it does.) I understood the young man who told us his story, I felt the same way when I left Cardiff. I felt a lot better myself when I went to friendly London before setting out on my next adventure. After a week in Cardiff, London felt warmer and friendlier than it ever had before to this Canadian globe trotter.

This photo shows the scene often shown in the tv program “Torchwood”. You can see it in Netflix, I really liked it and that show put Cardiff on my radar of places to visit.

If you found this posting interesting, please share it with your friends. Please note that the experiences here are only my experiences from spending one week in Cardiff and may not be representative of the city or the people thereof. These were simply the experiences I had. Thanks for reading! Cheers! Darren http://www.PersonalTravelStories.com