With more than 15 million residents, this sprawling city is also a haven of interest for the foreign traveller. I stayed in four locations over three weeks and experienced sensory overload every day. A brilliant adventure for my brand of interests.

My first Indian commuter train ride. People start to disembark before the train comes to a stop!

Inside a train going from Kandivili to Juhu. The Indian railway is the largest employer in the world with 1,600,000 employees! 55,000 trains at the edge of their lifespans move millions of passengers every day. 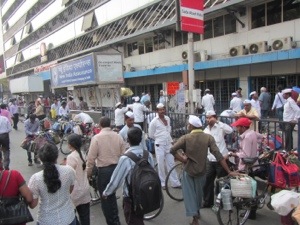 There are quite a few people who live in India.

The Gateway of India is Mumbai’s most iconic landmark.

Elephanta Island is a ferry-ride away from the India Gate. Famous for the Elephanta caves, so named because the Portuguese found an ancient elephant statue here. 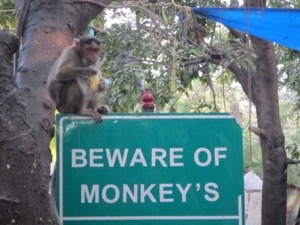 The Elephanta caves are elaborately carved into the rocks.

I wrote a story about my visit to Elephanta. I spent the day with German friend, Martin, and Indian friend Gautam. 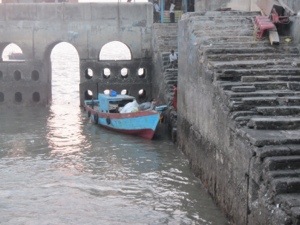 The docks of Elephanta.

Seagulls flying with us during our return to Mumbai. Check out the videos I made of them! 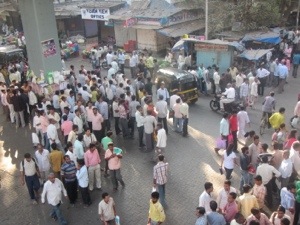 Men gather before going to temple on Sunday Morning at Vile Parle, Mumbai.

Oops! I did not notice the instruction at the bottom of this sign until after I had broken it during my visit. 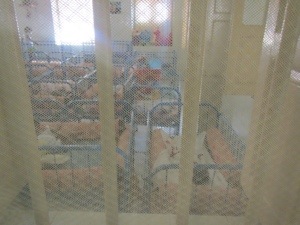 It’s difficult to see through the bug screens into the nursery of this orphanage, but my videos are easier to see. 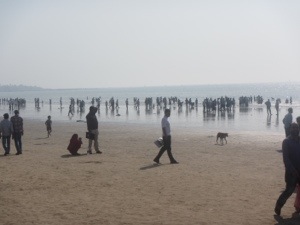 The beaches in Mumbai are not for swimming, they are for taking strolls in the cool breeze. Juhu beach is one of several havens to escape the enormous city and is very convenient. It is also a venue for illicit trades in the evening, which were very out in the open.

Creative wiring at my flat rental in Mulund. (In the building entrance.)

The kitchen of my flat rental in Mulund, Mumbai.

The squat toilet of my flat in Mulund, Mumbai.

Colourful laundry hangs wherever it finds a place. Visual stimulation is everywhere and I will miss this kind of interest when I return to Canada.

My neighbors in Mulund, Mumbai. Wherever there is an empty space, people will set-up home. Come to think of it, there is no empty space. 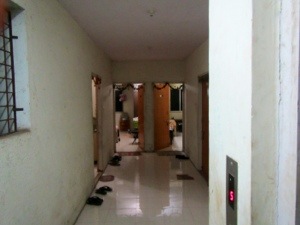 There was a really nice feeling of community in the building where I had my flat rental. People kept their doors open to the hallway whenever they were home to come and go from each others flats. These flats were all one-room plus kitchen and bath, so the families were completely visible from the hallway. They only closed their doors when sleeping or when not at home. 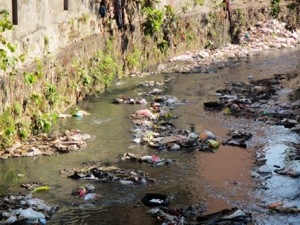 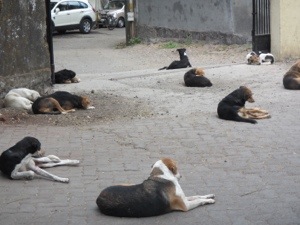 I rarely saw rubbish inside bins anywhere in India.

Such a fun name for a dairy! 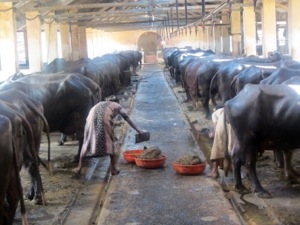 Blending in with locals and with the sign at these caves in Sanjay Ghandi National Park. 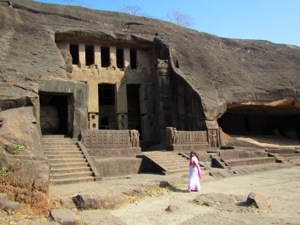 More ancient caves carved into rocks in this large park that separates the Western and Eastern suburbs of North Mumbai. 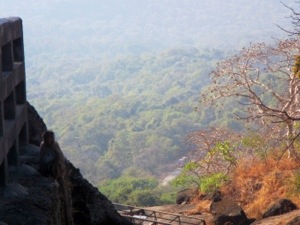 Crowds on the streets near Mulund station, Mumbai. 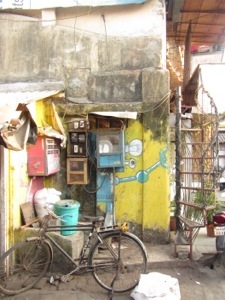 Cheerful street art in the small back-streets of Bandra, a fashionable district of Mumbai. 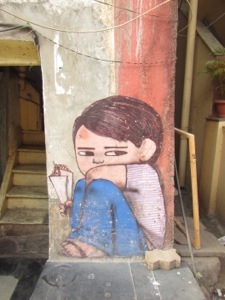 I retreat to a five star to take a few days break away from the excitement and chaos of India.